The second generation Mahindra Thar has been spotted testing in India for the very first time. Spy images shared on the web reveal a test-mule of the model spotted on the roads of Coimbatore. The first generation Thar made it’s debut back in 2010.

As seen in the spy images, the new generation Mahindra Thar is wider than the outgoing model. The front-end has been redesigned although it retains the 7 slat grille flanked by circular headlamps on either side. A few other elements seen on the test-mule include fender mounted turn indicators, fabric soft-top, side steps and a side-hinged tailgate. The model in question also seems to have some kind of test equipment at the rear.

The next generation of the Mahindra Thar is expected to be based on a new chassis that will comply with the upcoming safety norms. Powering the model could be a BS-VI emission complaint diesel motor paired to a four-wheel drive system with locking differentials. Details regarding its launch remain undisclosed at the moment although the model is likely to debut at the 2020 Auto Expo. 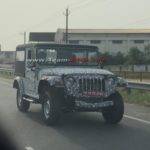 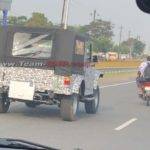 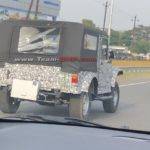